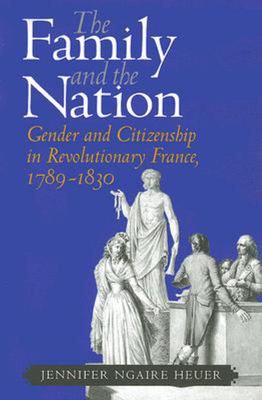 The Family and the Nation - Gender and Citizenship in Revolutionary France, 1789-1830

The French Revolution transformed the nation's--and eventually the world's--thinking about citizenship, nationality, and gender roles. At the same time, it created fundamental contradictions between citizenship and family as women acquired new rights and duties but remained dependents within the household. In The Family and the Nation, Jennifer Ngaire Heuer examines the meaning of citizenship during and after the revolution and the relationship between citizenship and gender as these ideas and practices were reworked in the late 1790s and early nineteenth century.Heuer argues that tensions between family and nation shaped men's and women's legal and social identities from the Revolution and Terror through the Restoration. She shows the critical importance of relating nationality to political citizenship and of examining the application, not just the creation, of new categories of membership in the nation. Heuer draws on diverse historical sources--from political treatises to police records, immigration reports to court cases--to demonstrate the extent of revolutionary concern over national citizenship. This book casts into relief France's evolving attitudes toward patriotism, immigration, and emigration, and the frequently opposing demands of family ties and citizenship.